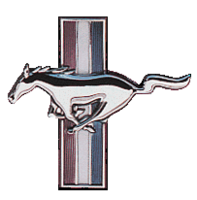 My First Pony and Many More After That.... 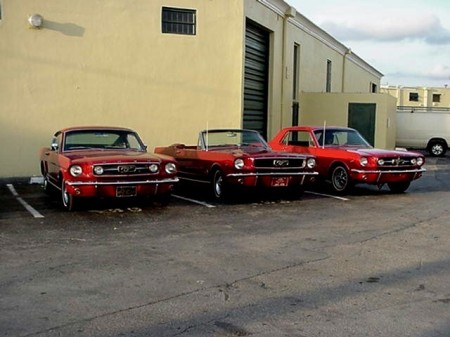 It all started for me 47 years ago when my grandparents bought me Mustang # 1 for my 16th birthday. The 1965 Mustang was a bright orange with orange shag carpet everywhere. They bought it for $400.00. The seats were torn and the paint was faded; but it was love at first sight. I was in love! That car got me to catch the "illness" that many call "Mustang Fever". I drove the car all through high school and by my senior year, I had the nicest car around.

Then, by 1976, I had to send that Pony to the "glue factory" for running a red light. After loosing my best friend, I set out to buy Mustang # 2. This was a 1965 white car with no interior.  After transferring everything I could from my first Pony to the new one, it was time to hit the junk yards.

Back then, junk yards had more Mustang parts that they knew what to do with them. The parts were cheap. They were no Mustang suppliers so all you can do was use the used parts. Like most high school kids, I gave my car the custom look: US Indi 14x10 mag wheels, air shocks, G-6014 tires, the car was highlighted with custom racing stripes. The car really look sharp!﻿

After about 2 years, the Mustang's worst enemy made it grand appearance in the rear quarter panel and under the doors. If you don't know it already....its worst enemy is rust. Now it was time to shop for a blue paint job. Knowing the car was going to be laid out for a while, I set starting looking for Mustang # 3.

Looking through the Sunday's Classifies (no Auto Trader back then) , a 1965, A Code, GT Coupe was sitting on a used car lot almost crying out loud to take it home. I was 18 years and at last a two car family.

For the next 2 years, I was quite content with my 2 Ponys until I stumbled upon my dream car. A 1966 Mustang convertible. From the first drive through Key Biscayne, this car would become the SPIRIT of what was soon to be The Mustang Collection, Inc.

SPIRIT had a amberglow and partchment Pony interior; but needed to be painted and a new top. With the top down and the FM converter installed, all went well for SPIRIT first ride off the ranch. Ranch was what my grandpa called my house when he came to visit.

There was just something about driving to Key Biscayne via Coconut Grove. Be it day or night, the ride was, and still is,  beautiful. With the view of the water and sailboats as you make your way to Crandon Park and back home again. By now, as you can tell, I had become totally obsessed with this fantasy set of Ponys.﻿

If you are keeping count....we just became a 3 car family by 1980. During the next 2 years, I had added another 1966 convertible and a coupe. Both cars were rough; but not impossible restorations. A little TLC and both cars were sold for a handsome profit. These 2 projects lay the ground work for the Mustang Collection, Inc.

Our grand opening party now took top priority. We planned a party that South Florida Mustang owners still are talking about 21 years later. The Mustang Collection, Inc. was born on April 10, 1982. At that time, we purchased 54 Mustang cars for parts and we have been supplying new and used parts for the "Classic Pony" ever since. ﻿

Check out the latest restoration process for Mustang # 3﻿

to print out the Restoration Tips Form that will help you with  your restoration needs!﻿